Shelley Simpson’s latest solo exhibition Like-Comment-Share (at CEAC until April 15th) features 34 paintings (ink and resin on board) as well as an interactive computer-based application and postcards for visitors to send. In these paintings Simpson is describing the social networks we build in the digital realm: “I am interested in how this new form of communicating and connecting affects our emotional relationships with others – does the digital environment enhance or restrict our communication? Are we closer to each other or more distant? Are our communications more real or less real? Are we expanding or narrowing our lives?” The paintings are three specific shapes – an oval, a capsule, and a circle that is divided in half. The split circle represents the brain; the two hemispheres of the earth; and the earthly and ethereal/heavenly realms (and asks where the internet resides). The oval references map-making, specifically the expanded oval showing the globe in one space, whereas the capsule shape introduces the question of whether we are ‘self-medicating’ by using social media. Are we using it to fill a void within ourselves, and does it work? In addition the range of shapes can all be read as medication. “Many millions of people use social networking like Facebook on a daily basis. Like – Comment – Share raises the question of what we want from social networking and whether we get it.”

As demonstrated by her latest exhibition, Simpson is specifically influenced by science and scientific developments, especially the relationship between science and our perception of ourselves as humans. When asked which artists she finds particularly influential, Simpson rattles off numerous individuals who work in a variety of media, such as data visualiser David McCandless; expressive painters like Max Gimblett and Judy Millar; sculptors like Louise Bourgeois; video artists like Jed Town, Greta Anderson, Bruce Nauman; photographers like Ann Shelton and Nan Golden; as well as installation artists like Yayoi Kusama. However, her favourite artist at the moment is Roland Flexner, a French artist based in New York City. Manipulating ink and graphite – such as blowing ink bubbles onto paper through a specially made straw to drop instant circular artworks, Simpson primarily loves how Flexner is a “master of his medium – but part of that mastery is allowing the material to behave in its own uncontrolled way”.

While not formally trained in the visual arts, Simpson holds a BA in History and has attended several art courses in New York and Auckland, and was most recently a participant in the AMP year-long mentoring programme hosted at CEAC and led by Anne-Sophie Adelys and Andrew Tolhurst. Her range of media is not limited to painting, having created several video projects in the past including the interactive work Subduction at ARTSPACE in Auckland. This was a submersive interactive experience where users played a midi keyboard which triggered projected video and audio. At one end of the keyboard the video samples were all natural, while at the other the samples were all based on technology. This work was also produced as a video and was included in the 1998 NZ Film Festival in the Moving Image Centre Short Cuts programme. 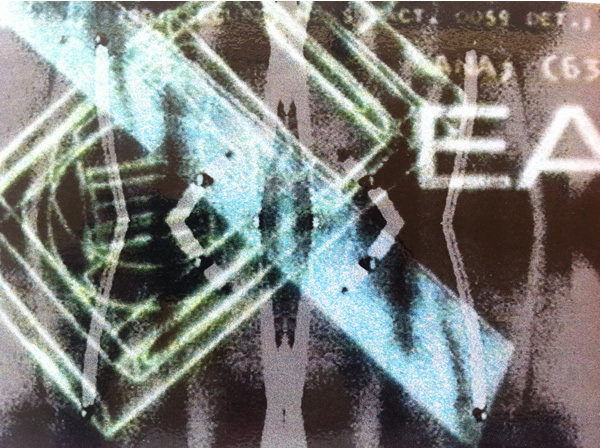 Interaction appears to be a key element of Simpson’s art practice, having collaborated at Artstation with Esther Lamb for the project Hoopla!. Funded by Creative Communities, Hoopla! Invited participants to complete a circular, textile-based artwork in a wooden hoop. The hoops were displayed on the walls of the gallery and then returned to the maker at the end of the show. 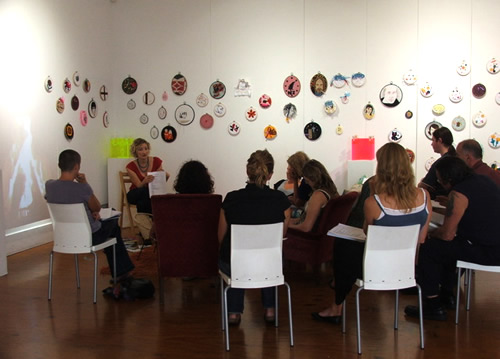 Class being held in the gallery space while Hoopla! was in progress

You can check out Simpson’s work in Gallery 36’s upcoming group show 4 Years On at Pearce Gallery, April 4th – 8th 2012. She is also working on completing a number of private commissions as well as developing a new series of paintings that take her current technique in a different, more personal direction.

(Gallery36 is no longer available online)

1997 Artspace Interactive computer installation ‘Subduction’
“What saves this show is the interactive work by Aucklander Shelley Simpson where video projections, vigorous as action painting, can be overlaid with other images and accompanying sound by the viewer playing on a keyboard. There is a long history of such colour organs in the 20th century but this is a very lively example.”
TJ McNamara, NZ Herald